Home About Us Board of Directors

Mr. Riad Tawfiq Al Sadik is a distinguished name in the Middle Eastern construction industry. Born in Palestine, his initial years were spent in Lebanon. After graduating from AUB, he trained in the UK and worked for three years, the last year of which he was Head of Engineering for the Eastern Region of Saudi Arabia. Mr. Sadik was the Chairman of BIC Contracting (formerly Habtoor Leighton Group).  He is the Chairman of RTS Investments Group which comprises of Construction Machinery Center, Dar Al Rokham, HSSG Foundation Contracting LLC, SPECON LLC, Kazax Minerals Inc. in Kazakhstan. Mr. Sadik also owns 2 five-star hotels namely  Grand Millennium Dubai and Grand Millennium Hotel Business Bay, Rosegrade Ltd. (a UK Services Co.), The Gulf-American Co. Inc., California.

Mr. Sadik is well known for his philanthropic activities, and he holds a wider interest in humanities. He is the winner of the  Lifetime Achievement  and Distinguished Alumnus Award (Engineer, Poet and Innovator) for 2016  from the College of Engineering & Architecture of AUB, Distinguished WEAA Chapter Award 2015 from Worldwide Alumni Association of the American University of Beirut, and Takreem Lifetime Achievement Award in 2015. He has also been conferred the honorary doctorate from Birzeit University. Mr. Riad Sadik also holds membership of various Boards of Trustees including the American University of Sharjah, Birzeit University Palestine, University of Paris II, Bethlehem Development Board, and the Institute for Palestine Studies. 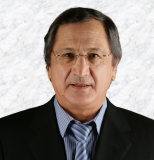 Thrasos is also the founder and Managing Director of several European-based companies that specialise in the delivery of MEP works, the distribution of electromechanical equipment and the provision of energy audits and solutions.

Stelios Thrasyvoulou is the Chief Operating Officer of Specon LLC and has 15 years’ experience in the Middle East and the United Kingdom.

Prior to joining Specon LLC, Stelios was an Assistant Director at Deloitte Corporate Finance Advisory in London and also held management roles at Andersen’s Economic and Financial Consulting practice in London.

Mr. Damerji graduated from McGill University in Montreal with a double Major in Economics and Political Science and worked in Corporate Finance for the Toronto Dominion Bank, managing loan and financial portfolios for some of Canada’s largest companies before returning to the Middle East and becoming one of the founders of Bayt.com. After helping grow the business into the Middle East’s leading online recruiter with over 150 employees operating in six different countries, Mr. Tarek sold his interest in Bayt to a leading US based Private Equity firm, and founded Wajehat, a company that specialized in the design, engineering and project management of Facades for buildings, utilizing an innovative outsourcing model for the fabrication and installation of advanced skins for buildings.

Mr. Tarek then became the Special Projects Director for the Al Habtoor Leighton Group (HLG), the biggest multi-disciplinary contracting group in the Middle East, with projects in Civil, Infrastructure, Power, Oil and Gas. In 2017, Tarek became a Director on the Board of HLG. He is also on the Board of Directors for Specon Group, one of the largest MEP contractors in the GCC, as well as on the board of HSSG, a leading Piling and Shoring Works company operating in the GCC. Mr. Tarek also heads up the private equity activities of RTS Investments focusing on new and promising technologies in mainly Fintech and Healthcare.